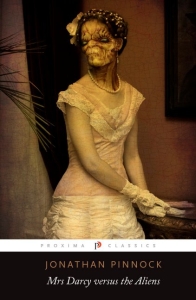 Jonathan Pinnock stops by to talk about his debut novel ‘Mrs Darcy versus the Aliens’, published by Proxima Books on 1st September.

[DB] Jonathan, congratulations. This is a very classy cover and splendid title. Is this genre-bending stuff?

[JP] Thank you! That cover’s terrific, isn’t it? Genre-bending? Up to a point, yes. In some ways, though, all I’m doing is taking a standard science fiction premise and relocating it in a different era to avoid having to deal with transient present day stuff (or – even trickier – future stuff). The fact that it borrows characters extensively from Jane Austen and the Regency in general is intended to add an extra frisson, as well as creating opportunities for some fairly daft gags. Although I would like to think that a good deal of the comedy would survive in a non-Regency context.

[DB] I read on Wickhampedia that Jonathan Pinnock is a 19th journalist and the original Mrs Darcy was published in the 1800s – are we talking parallel worlds here? Is this true? What’s the story?

[JP] Well, I’d start by pointing out that Wickhampedia is even less reliable than its more famous near-namesake. So I wouldn’t rely too much on that for the truth. Certainly, the Wickhampedia biography for Jane Austen contains details of several novels the existence of which seems to have escaped the attention of previous scholars of her work. Who knows what the truth of the matter really is?

[DB] The Jonathan Pinnock I’m familiar with is a prolific and pretty successful short story writer, also a software engineer. You’re exceptionally good at juggling your creative and logical selves. What’s your secret?

[JP] Ha. It’s all an act really. Most of the time I just stagger from one crisis to the next.

[DB] So, does Mrs D have a future? Will there be a sequel?

[JP] One of the best things that happened during the writing of Mrs Darcy versus the Aliens was that the characters somehow freed themselves from the original (somewhat limited) concept. So, yes, I definitely think there’s room for a sequel, should the public demand one. Whilst the main strands of the plot are all nicely tied up at the end of the book, there is an unresolved question as well, and the last words of the book are “Mrs Darcy will return in ‘Mrs Darcy versus the Monster'”.

Jonathan Pinnock has had over a hundred stories and poems published in places both illustrious and downright insalubrious. He has also won quite a few prizes and has had work broadcast on the BBC. His novel ‘Mrs Darcy versus the Aliens’ was published by Proxima Books on September 1st, and will be followed in 2012 by his Scott Prize-winning debut collection of short stories, ‘Dot(.), Dash(-)’, courtesy of Salt.

4 Replies to “Jonathan Pinnock, Mrs Darcy versus the Aliens …”