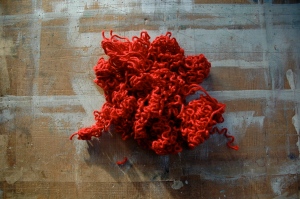 Well I finished my knitting project, and then I cut it up. Well not exactly. I’d knitted it beautifully but it wasn’t quite right, not long enough, the sleeves didn’t fit how they should so … I took it apart and unravelled quite a lot of it. The task then is/was to put it together again, but how I wanted it and if I could do that then I could do the same to other things, like the novel-like thing that metaphorically resembles the bits of wool on the left.

Knitting’s a pretty good metaphor for writing. You have an idea, assemble everything you need, allocate time to carry out the project and start. Push through endless rows of knit, purl, increases, decreases, pick up dropped stitches, unravel five rows of pattern you did wrong because you weren’t concentrating enough to notice, and though you’ve a vague idea of how a certain bit’s supposed to look, it doesn’t look quite right but you hope it’ll all fit together when you make it up at the end …

Even if you do follow a pattern, and I do for knitting, nothing is certain until you have the whole thing, all the bits and pieces in front of you, and then when it’s made up, you try it on and … if it isn’t how you want it to be – like the novel-like thing – well, it’ll end up in a bag or a drawer somewhere.

What a waste of time and effort and wool and …

Which is why I took said knitted thing apart and why – now I have almost reconstructed it – amending the pattern to suit how I want it to be, to look and hopefully to fit, I might have faith in doing the same to the novel-like-thing.

Knitting as a metaphor for writing