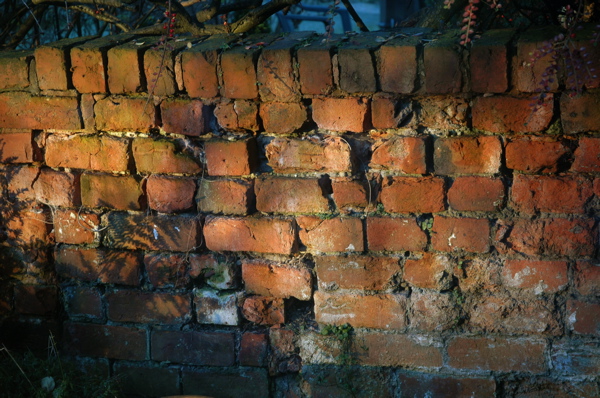 This is the brick wall outside our kitchen window. It is so beautiful when the sun hits it first thing in the morning, which is why (and when) I took this photograph.

I refuse to acknowledge the ‘brick wall’ as metaphor. It’s a family thing. My mother -along with my stepdad (both over 80) – travelled from Kyrenia in Northern Cyprus via Heathrow to Hay on Wye last Thursday at the height of snow and travel chaos, in less than nine hours. My sister and her husband were not so lucky. They were due to fly back from the Canaries last Sunday but the flight was cancelled and they couldn’t get another until Friday. Nothing they can do about it, so my sister has gone off to buy Christmas cards. As she put it ‘we’ve got plenty of time to write them!’.

I’m not going anywhere, which is fine, especially now we have central heating. I’ve reviews to write, stuff to organise for Christmas and another 60,000 words to print out to add to the 30,000 words I’ve already done. Then after Christmas I’ll start revising, rewriting and generally playing around with this ‘thing’ I’ve written over the last three years. Brick wall? Me? No way…