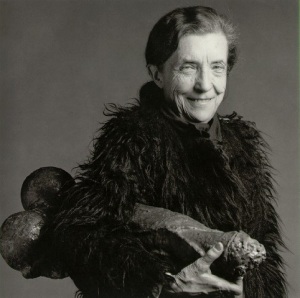 After watching a Culture Show (BBC2) special on the Royal Academy Summer Show last night and allowing myself to get all riled up about the art bollocks issuing from the judges’ lips while discussing artists shortlisted for the Wollaston Prize, I stayed up to watch Alan Yentob’s programme on Louise Bourgeois (Imagine, BBC4) and hoped it would be better.

And it was. But it was Louise Bourgeois, not the programme in particular, that I enjoyed. Did Bourgeois talk art bollocks? No, she did not. Did the artists who were invited to her regular salons talk art bollocks? Of course they did and the way she responded was brilliant.

‘What is your work about?’ Bourgeois asks one of them.

‘It is about the torment of being an artist’, says the artist.

‘A torment? A TORMENT?’ she replies, ‘Being an artist is NOT a torment. It is a PRIVILEGE’.

Of course it is. So why do so many artists – and writers – publicly agonise about the torment of (their own) creativity? I don’t know. All I know is that ‘dealing with stuff, making sense of that stuff’ – be it personal or political – is an integral part of the creative process and Bourgeois deals with her own personal demons in the best possible way – by channeling it/them through her art. And (in my opinion) that’s the way it should be. Maybe we should all just shut up and get on with it!

Being an artist is a privilege Louise Bourgeois Reviews